Shell Beach Protected Area is located in the northwest part of Guyana, in Region 1, stretching over 120 km (75 miles) of beach and mudflats. The area gets its name from the presence of beach composed of fragmented shells. It is unique and is representative of Guyana’s diverse ecosystems, containing both terrestrial and marine components.

The area is rich in biodiversity with relatively intact and productive ecosystems. Land cover includes the largest and most intact mangrove forests (both coastal and riverine) in Guyana, seasonally flooded savannahs (wetlands), and sandy beaches. The vast mangrove forests serve as nurseries for a variety of fish species. Fifty-nine species of fish have been recorded in the Shell Beach area (GMTCS, 2011).  It also hosts Caribbean Flamingoes, West Indian Manatees, Guiana dolphins, Jaguars and the Scarlet Ibis.

Shell Beach is best known as the nesting site for four endangered sea turtles: Leatherback, Green, Hawks Bill and Olive Ridley which are under threat from fisheries, turtle hunters, and plastic pollution in our oceans. It is also important to the livelihoods of nearby indigenous and mixed communities, who have an important role to play in the management of Guyana’s only coastal protected area.

This protected area is proposed as a globally important birding area, supporting more than 200 coastal and migratory bird species.

Leatherbacks and other marine turtles nest from February to July each year at Shell Beach. Relatives of these modern-day sea turtles existed on earth 110 million years ago, which means marine turtles once shared the planet with T-Rex and other dinosaurs!!

The sex of turtle hatchlings is dictated by temperature: warmer nests lead to more females and cooler ones lead to more males—which is why climate change could drastically affect their populations by creating too many females and too few males to match them for reproduction. 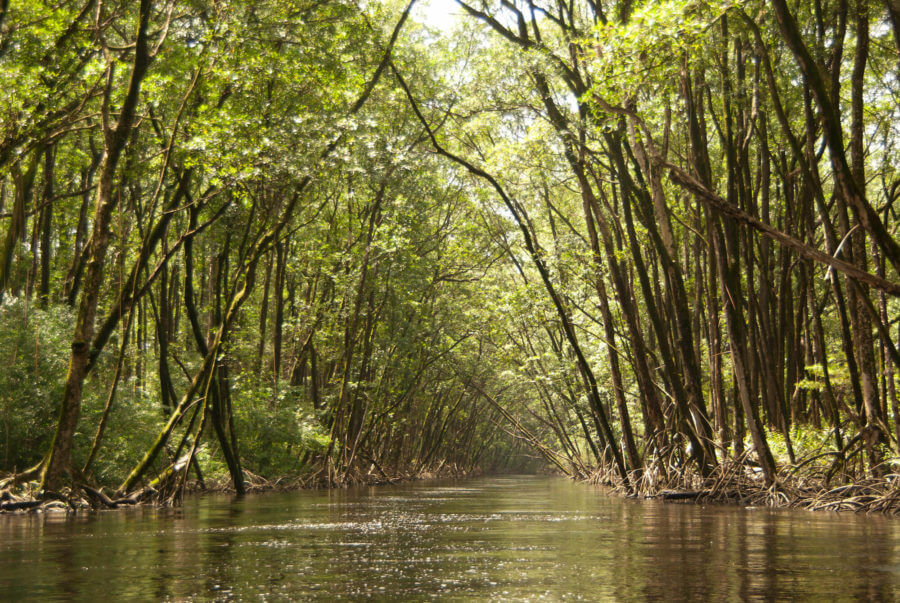 Land cover within Shell Beach Protected Area includes the largest and most intact mangrove forests (both coastal and riverine) in Guyana. Mangroves guard Guyana’s low coastline against storm surges, erosion and flooding from the ocean. The vast mangrove forests provide important nursery habitats for fish and invertebrates thereby replenishing the fish stock in the ocean.